Ok, this one has words, but I had to meme Josie… 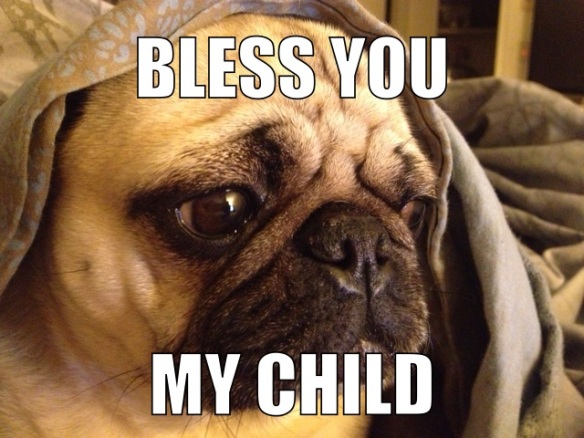 I realize it’s been awhile since I’ve posted about Josie, so here’s an update for you.

She swallowed a palm tree seed (a big one), which got stuck in her stomach and basically blocked her up.  She had to have an emergency surgery, but the recovery went really well.  Around the same time, she was stung by a bee and went into anaphylactic shock.  She passed out on the living room floor and her breathing got very shallow.  Luckily, we drove to the vet at the speed of sound and she bounced back fairly quickly.

Needless to say, we have had some major health scares with Josie in 2013 and I’m so thankful she’s still with us.  I have to admit she has benefited greatly from “mommy guilt” these past few months.  She’s been getting extra treats, extra love, extra playtime…you name it!

Josie (left) and Bailey (right) hanging out on the slide.

For St. Patrick’s Day, we took her and her best pug pal, Bailey, to a pug meetup event at a local doggy daycare.

They had toys, jungle gym equipment, and even a little water feature for the pups to swim in!

Josie was not sure about the swimming pool.

If you don’t know this already, pugs are one of the goofiest breeds of dogs out there.  They love to make people laugh, they look ridiculous, and they roll around snorting all day long.  To see a group of 20 pugs roaming around a jungle gym was one of the most glorious things of my life. 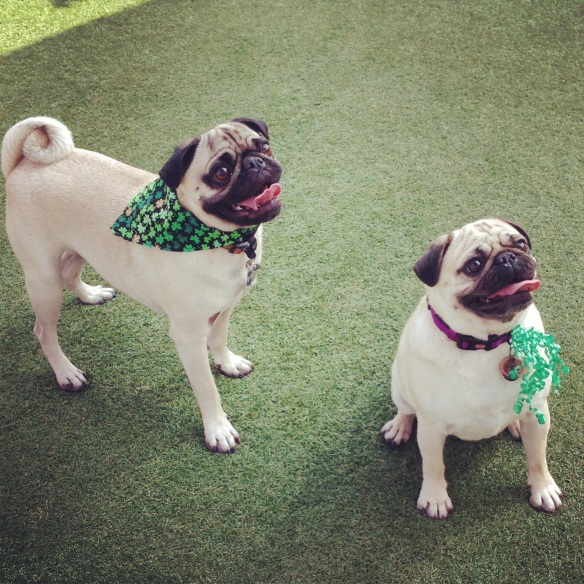 Most of the pugs had some sort of green spirit for St. Patrick’s Day, which added to the hilarity.

I think this lab had his fill of pugs:

We had a wonderful time playing with the pugs, but the best part was how zonked Josie was afterward. 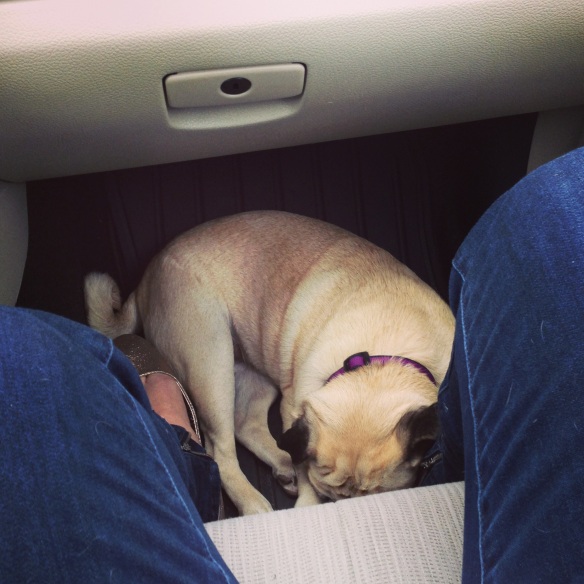 Passed out pooch in the car.

What’s your favorite breed of dog?  How do your pets benefit from guilt?  Extra treats?  Sleeping on the bed?

What to expect when you get your wisdom teeth removed: The Jonathan chronicles.

1) Your fiancée will be busy watching Let’s Make a Deal in the lobby, while you are getting knocked unconscious.

2) As soon as you come to, you will attempt to tell everyone around you about how you fought a dragon.  But you must adamantly remind them that it was a robot dragon, NOT a real dragon.  Upon further thought, you tell them you can’t be sure if it was real or a robot.  Things are confusing now.

Jonathan approved the posting of this image

3) You will request your teeth back as a birthday present for a friend.  Your fiancée says she will work on making that happen.  You’re satisfied that you have found the perfect gift.

5)  You will sing Mulan’s “Reflection” in the pharmacy.  The lady collecting porcelain cat figurines will give you a strange look.

6) As soon as you get home and the anesthesia meds wear off, you will have terrible pain and nausea.

He’s all better now!  A little sore, but he’s off painkillers and he’s starting to eat more.  🙂

Have you said any crazy things coming out of surgery?  What’s the best you’ve heard?

Imagine, if you will…a sandwich so powerful, so tasty, so UNbelievable, that your life would be forever changed with 1 bite.

I took that bite and I’m a different person because of it.

Unfortunately, I didn’t capture this beauty on camera.  However, I did draw an incredible likeness of the sammy:

What have you eaten recently that deserved an “amen” or even a “yeah, buddy”?

p.s. This was hilarious in the midst of an 8 hour lecture.  I realize the comedic value might be lost once my sanity returns.

p.p.s. Wouldn’t it be awesome if this is what the “Cooking” section of The Pioneer Woman’s blog was like?  hahahaha I have a feeling she might lose several thousands of readers.  I hope I don’t lose you to this.

Obviously this has been a crazy week here on the beach.  I have tests, papers, sick puppies, and out-of-town guests up the wahzoo.  In an effort to remain sane, I’m reposting a guest post that did not receive nearly as much attention as it deserves.  Please join me as Kat recounts a day in the life of a health food blogger.  (Oh, and she actually finished a marathon a few days ago.  Pop on over for some really inspirational posts.)

So you know, I woke up this morning, and I was so excited to find a new box of calcium supplements on my doorstep! Apparently the South Americans have been ingesting crushed lemur bones for years to make sure they’re getting the right minerals and I know I’ve been working really hard to find a natural way to fight osteoporosis at the age of 25.

Naturally I made a smoothie for breakfast with every vegetable I had in my kitchen. And some carob chips, just to you know, pretend that I can hide the flavor of the green. I used two scoops of the lemur bones and I was really impressed. There was only a slightly chalky aftertaste, but nothing that really overpowered the taste of the rest of the smoothie. Because I eat more calories in a day than the rest of you, I threw a couple spoonfuls of granola on top of the whole shebang too, just to make sure that I could eat as nutrient-dense of a morning-meal as possible.

Then I went to work, where I spend the majority of my day taking pictures of shit instead of actually doing it and bitching about the book deal I have and can’t find the time to write for, even though I spend the.entire.day.writing.

I was totally NOT hungry, but I needed to eat lunch. So, instead of eating a normal meal, I had some greek yogurt, topped with pumpkin butter, a couple of spoonfuls of almond butter (Read: 200-300 calories worth of nut butter) and I drizzled the shit out of it with Agave! I just love that stuff even though no other culture that traditionally incorporates agave into their meals consumes it in the vast quantities that we do. But I’m sure it’s totally healthy.

After work I ate a granola bar, that I made myself. No big deal. That’s only 450 calories of granola on the day.

But I needed something to hold me over because I was going for a nine mile run and then doing an hour of hot yoga before dinner!

For dinner, I had a Pom Spritzer (Pom and Sprite!), and my husband made us dinner! We did a raw food night where he whipped up a cubed-tofu salad with vinaigrette, mushrooms and kale and some sprouted rolls. **Insert picture of roll that looks like a dog-turd here**. I love him so much.

For dessert, I toasted a sandwich thin, spread it with peanut butter and sprinkled it with all-natural, organic, fair trade, vegan chocolate chips! Delish!
Perhaps next I could mix lemur bones, almond butter, flax, and chia seeds into a nummy cookie log! I’m also planning on making homemade all-organic fair trade and vegan dog treats for Max! isn’t he like the most adorable lhasa apso ever?!?

And naturally, because a giveaway is so necessary for you, readers. I have another jar of Lemur Bones! Just comment on how you think that they would improve your calcium needs! Let me tell you, they’re just fantastic. I’ll pick one lucky winner tomorrow!

See you all tomorrow! It’s going to be a big day!

Do you read foodie blogs?  What are your favorite moments and what can constitute as crazy as lemur bones?

Me: Has there ever been an attempt to make a human monkey baby?

Jonathan:  Think about what you are asking me.

Me:  I mean, I get that it’s not PC in this day and age, but they did all sorts of crazy experiments in the 50s.  Surely I’m not the only one who has thought of this.

Jonathan:  I’m done talking about this.

Me:  Will you please just look it up on your iPhone?

Jonathan: *sigh* Ok, I found something on Yahoo Answers.  Do you want to trust this?

“We are more closely related to chimps and bonobos than horses and donkeys are to each other, and it’s well-known that they can interbreed. There is a rumour that a certain scientist once impregnated a chimp using his own sperm, but got cold feet before the offspring was born and destroyed the animal. A human-ape hybrid is never likely to happen for moral and ethical reasons, supposing it’s possible at all, and a good thing too – imagine an animal with the strength and aggression of a chimp and the intelligence and capacity for evil of a human. It’d be lethal.”

Me: I KNEW IT!  Wait, could you please repeat the last line?

Jonathan: “…imagine an animal with the strength and aggression of a chimp and the intelligence and capacity for evil of a human. It’d be lethal.”

Me: hahahaha OMG I WANT THIS HUMAN MONKEY BABY TO BE BORN!

There is a new (or is it already old?) meme floating around the internet: Chicks with Steve Buscemi Eyes.

My friend, Tuan, has mad Photoshop skillz and decided to Steve Buscemeyes a few friends.

Here is the real Steve Buscemi, if you aren’t already familiar:

I’m going to share these next few images with you because I love you and because I couldn’t stop laughing when I saw them.