Some local Californian brews I drank *for testing purposes only*

I’m here to tell you that Beer Week is in full swing on the internet!  My bloggy friends have teamed up for another week full of delicious beer-filled recipes and brewery tour guides.  From maple ale ice cream to Oktoberfest shenanigans to pumpkin beer bread, this week of beer truly has it all.

I decided to try another home deep-frying adventure because everything tastes better deep-fried.  Let’s be honest.  So I made Beer Battered Shrimp Tacos with a roasted poblano slaw.

I grabbed what was on hand to make a sauce for the slaw.  I had no idea how it would taste, but the end result was a creamy slaw with a bite of garlic and hints of the savory roasted pepper.  YUM! 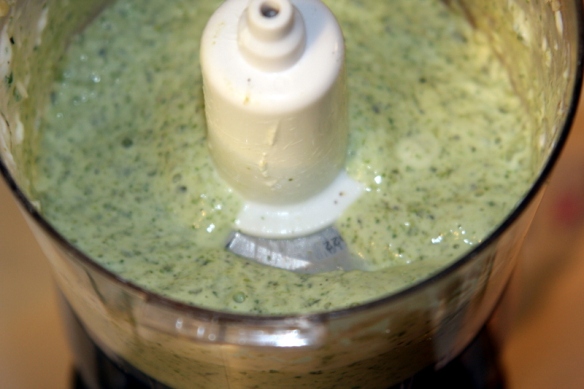 Combine in food processor until creamy.  Add to cabbage until desired consistency.  I kept mine on the creamy side to pair it with the crunch of the shrimp.

After you grill/roast the poblano, simply tent the pepper in foil for about 5 minutes until the skin has steamed. Then it is much easier to scrape off the skin with a knife.

Next up were the shrimpies!  Make sure your shrimp are peeled and deveined.  Sometimes the butcher will do this for you, but it doesn’t take too much skill to do it at home.

Pat those shrimpies dry with a paper towel before you start this shenanigans.  I almost added a picture of this step, but I discovered that pictures of raw shrimp are really unappetizing.  I’ll spare you the gory details.

Mix ingredients through pepper together in one medium bowl.  Set aside.

Mix panko and wheat germ (optional) in another bowl.  Set aside. 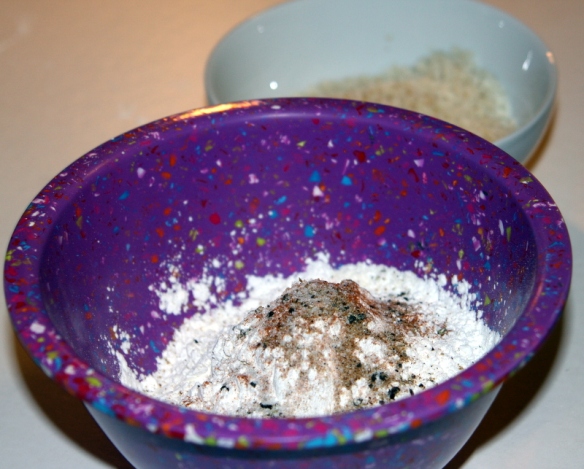 Dunk each shrimp in the flour bowl only and shake off excess flour.  Set the shrimpies aside.

Then choose the beer of the day.  I went with a light wheaty beer because I really don’t like hops.  Who’s with me?  I also thought it was cute that the bottle had a shark on it…I wanted to stick with a nautical theme. 🙂 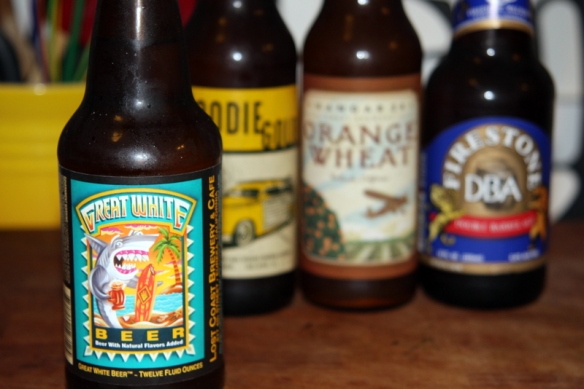 Add about 1/2 a bottle of beer to the flour mixture.  Add a little at a time.  You want the batter to resemble a thick pancake batter.

Drink the other half.  This step is important!

Once your oil reaches at least 375 degrees, add about 6 shrimp to the pan at a time.  Cook for 3 minutes or until golden brown, flipping partway through. 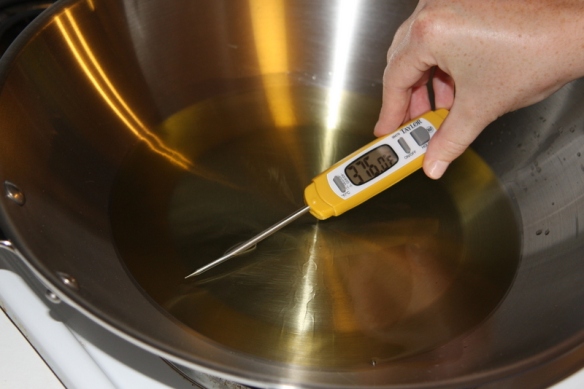 Such an exciting moment to capture on film! 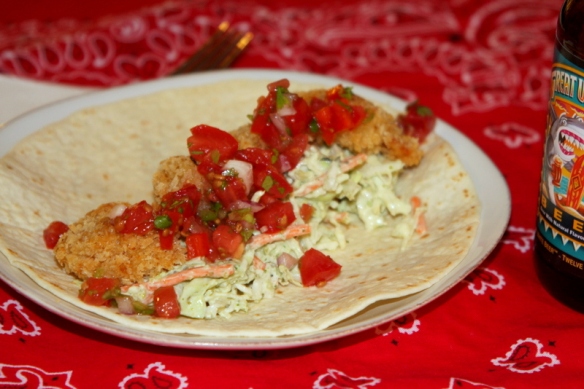 This dinner was rated an 11/10 from the whole family.  I get that the whole family is only myself and Jonathan, but we said we would make this again in a heartbeat.  There were no leftovers.  I about passed out in the first bite.  Make these.

What’s your favorite thing to make/eat with beer?

Check out the other fabulous Beer Week posts here:

Munching in the Mitten–Pumpkin Beer Bread

This weekend marks my last weekend of summer freedom before the second year of graduate school starts again.  Not that I really had “summer freedom”, as I was in summer school up until last week.

The point is, I am living it up as much as possible until Tuesday evening hits like a ton of bricks.

Which is what brings me to this salmon dip.  I brought it to a friend’s backyard BBQ and ate like it was my last supper.

This recipe takes anywhere from two to ten seconds…total.  It’s that easy.  If you love salmon, you’ll love this…I promise.

The cast of characters:

We bought the fancy salmon this time around, but cheapo salmon works in a pinch.

1 package salmon in the pouch – shredded

Simply combine all ingredients and chill until you are ready to serve with crackers or veggie sticks.

This recipe is in our stash of family favorite recipes, but we got the original from our friend, Ginger.  The family favorites are tried and true, never fail to please a crowd, and taste delicious served with love.  You know those recipes…the ones that have tattered corners and get passed around at every major holiday?  Yup.  mmmm

Shred the salmon a little bit with your weirdly angled thumb. I swear my right thumb isn’t normally this disfigured.

We ended the bonfire with an outdoor movie and popcorn and I couldn’t have asked for a better way to end the summer!

What are you doing to celebrate the last few days of summer?

So, my parents came to visit California from Minnesota for Thanksgiving.  This fact seems to be of great suspicion to everyone, but it does not mean that I am engaged.  They simply wanted to see where I live.

In order to do that, Jonathan and I took them on a big ole field trip to the Long Beach Aquarium!

I love love love any place that houses animals (even though I’m not entirely convinced they shouldn’t be left alone in the wild), so this was mucho exciting for me. 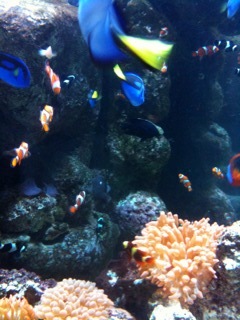 We saw some pretty cool shark, sea otter, and sea lion shows, but of course we didn’t take any pictures of those.

The whole time we were so stoked to see all of the fun fishies and see the shows, but each and every one of us ordered a fish taco for lunch.  Sick personalities or simply the effects of priming?  You decide. 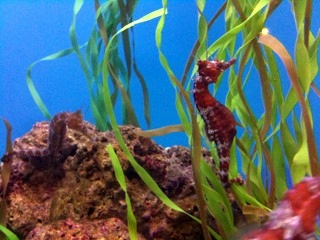 Field trips are for adults too!!

There are two shows that induce me to nap like none other…FBI Files and Barefoot Contessa.  Something about their soothing voices knocks me right out.

Some may find it bizarre that I nap to the Food Network and/or bloody crime scenes, but that’s just how I roll.

Anyway, yesterday I woke up from my nap and Ina was still on!  That’s like winning the lottery, folks.  Aaaand she was making sea scallops!

These were so easy and melt-in-your-mouth-y.

You will need:
1 lb. sea scallops (Bay scallops are too small)
Salt and Pepper to taste
sprinkle of flour

Chop up your 1/2 cup onion, 1-2-5 cloves of garlic, and 1/4 cup of parsley first because the scallops cook really fast. 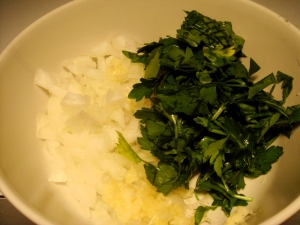 Got these bad larrys from the farmer’s market.  I am never disappointed in farmer’s market fish, but these were mucho expensive.  You can do this recipe on the cheap by using shrimp or maybe even my favorite “Krab”!

Make sure to pat them dry, because otherwise you will end up with a gooey mess.

Rub ’em down with some salt and pepper.  Toss with a sprinkle of flour (I will put another handful of flour on the next time I make this recipe for that extra sear).

Melt 2 Tbsp. of the butter and pan sear the scallops on each side for just under 2 minutes (medium heat).

All right Mr. DeMille, I’m ready for my close-up!

Boom!  I can already taste it!

Ok.  Now I took my scallops out of the pan to fry up the onions/garlic/parsley because I didn’t want them to overcook.  Use up the other 2 Tbsp. of butter for this step. 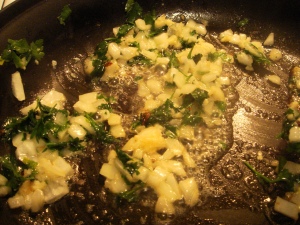 This should take just a few minutes until things are looking kinda golden.

Then pop the scallops back in the pan and add the 1/3 cup of wine. 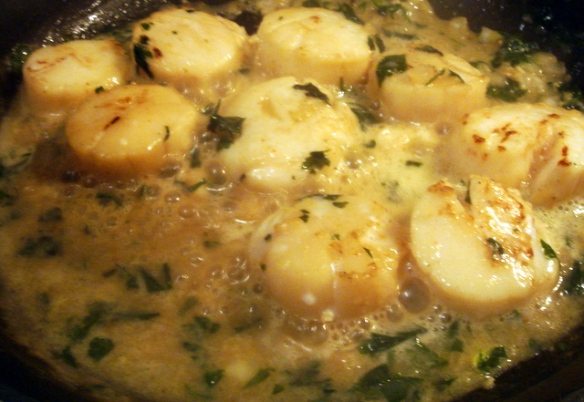 Cook this for another minute.

Squeeze the lemon over the top when served.

The hardest part about this recipe is cooking the scallops correctly.  You want them pan seared without overcooking them.  Mine were cooked through, but not as seared as I would have liked.  I think a little more flour and a little longer in the pan will do the trick.

All of that being said, this recipe was extremely easy.  It’s another one of those items that takes 10 minutes, but looks like you slaved away in the kitchen.

I have never successfully cooked fish.  This might be due to the fact that I tend to forget about fish in the freezer for months at a time, or it might be due to attempting healthy baked fish my first time out of the gates.  Either way, I thought I’d give it another shot.  This time I decided to do a fish fry. 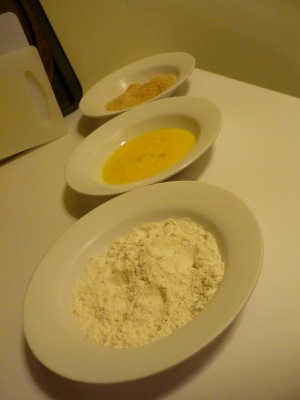 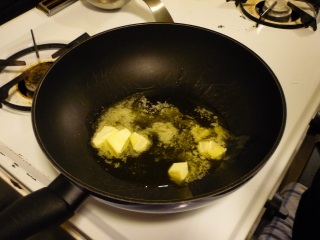 Drag your fish through the bowl dips.  Make sure you coat it nice ‘n gooooood.  Any white fish will do. 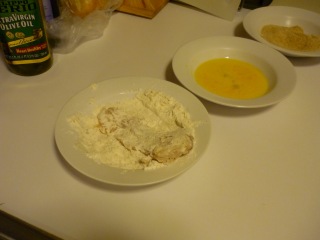 Set the fish in the fry pan for 3ish minutes on each side.  Stop once you have that nice golden crust.

We polished ours off with some microwaveable broccoli and a quinoa salad.  Totally delicious! 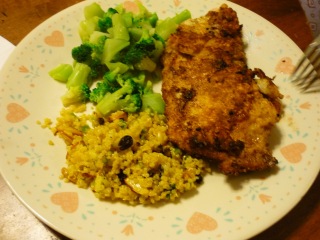 I’m really excited for new dishes to appear in photographs!  I might even buy some textured fabrics and props for better food photography.  Photography is something I definitely want to learn more about.  In the meantime, you get my mediocre skills and heart plates!